I met Mitko Mitev in Moscow on SQA Days conference last year where we were both speaking. We had a good time, rum and cigars, and he invited me to “his” conference in Bucharest.

Bucharest is nice city and I arrived two days in advance so I had plenty of time for sightseeing.

Conference was great. As speaker, you do not have too much time to attend other talks. You are polishing your talk before you speak and you have a lot of discussion after it. However, I visited at least keynotes and I enjoyed them. Conference was well organised and venue was excellent.

My speech was about Effective reporting in Agile and I think it was very interesting topic and there were a lot of questions and follow-ups.

After party was legendary. It was in very nice place, good music and there was also a quite place to continue in productive discussion.

I also enjoyed time with other speakers, specially Friday dinner in typical Romanian restaurant with live music was very nice. And btw, you have to try their famous desert called “Papalaši”.

My original plan was to stay in Romania over weekend but I had to be in States for customer training on Monday. So my flight was directly from Bucharest to Chicago. Terrible flight. At first I had only 20 minutes to change my flight in Berlin, it means a lot of running. I managed it but than I get the last seat at the plane = no possibility to rear your seat. We landed with one-hour delay in Chicago, so again, a lot of running… And finally – they lost my luggage…

However, city of Grand Rapids was very nice. I arrived around Saturday noon so I went for a long walk by river with the very important task – to catch region specific Pokemon which is not available in Europe. The first question from my kids when I called home was “Did you catch it?” Yes, I did J

Customer training went well. It was huge group so there were more trainers and I finally met some my colleagues face to face.

I left Grand Rapids on Wednesday. This time I had a better seat but there was a family with small kids sitting behind me. Plain was full so there was no possibility to change a seat = no sleep at all.

I had 10 hours to change my flight in London so I went to city centre for few hours. London is nice.

I spent weekend at home but on Monday I had to travel again. This time for customer training to Berlin.

I had some free time there for sightseeing but I was a but disappointed. It looks like entire city centre is under construction.

I spent one week at home and my next customer training was in Valencia. That is an excellent city for business trip. I arrived on Sunday and spent it walking on beach. Weather was very nice, sunny and 24 degrees.

I wish all my business trips are similar to this one 🙂 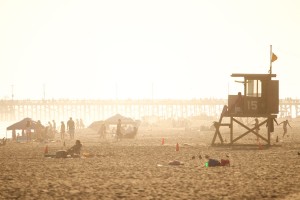